A memorable Deepavali family trip to Tirunelveli (and the village Kodaganallur, 45 mins from there) was coming to a close. My mother, sister and I were to take 12632 TEN-MS Nellai express (on 8th November) to return to Chennai, while my father was to stay for one more day; before returning through a flight from Madurai. To read Part 1 (detailing the onward journey by 12631 MS-TEN Nellai express) please refer https://ashwinkumar1989.online/2018/11/10/a-memorable-family-outing-down-south-part-1/ . We left Kodaganallur at 17 20 itself (almost 2.5 hours in advance) in an ambassador car; since we needed time to buy food for our dinner in the train, as well as the famous Tirunelveli Halwa. After the Halwa was purchased swiftly by my mom and the driver, my mom, sister and I went to Janakiram Hotel (a stone’s throw from the station) to purchase the dinner parcels; we had Vada Sambar and coffee in the process.

Everything was done so quickly and efficiently that we had about 1 hr 25 mins to kill when we reached TEN; leaving me enough time for a good amount of railfanning 😀 . ERS WDG3A 13145 shunted the rake of our 12632 Nellai on to Platform 1 at 18 25 itself 🙂 . There was a massive crowd waiting to board the unreserved coaches, which were just ahead of our AC 2 Tier coach A1. 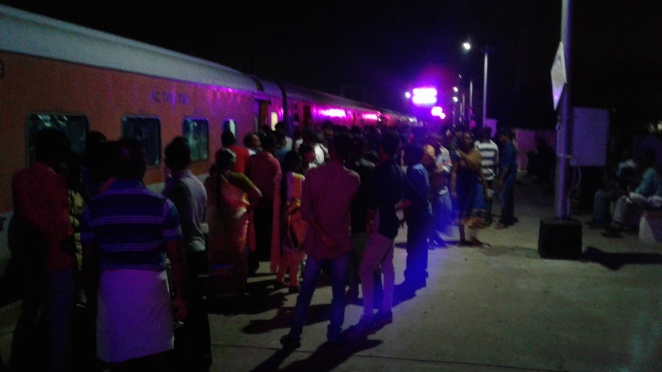 The LHB rake was powered by the noisy front EOG at 18 30 itself; which meant that we could settle down in our seats more than an hour before the departure of the train! :O Our loco was a HOG RPM WAP7i 30597.

As per the announcements, 16353 KCG-NCJ express was expected on PF5, 16724 Kollam Chennai Ananthapuri express on PF2, and 16127 MS-GUV express on PF3. Meanwhile, 12634 CAPE-MS superfast arrived on PF2 at 18 58 (2 mins early), behind RPM WAP7 30424 – this loco has WAP4 type LT as well as HT horns (in fact, 2 HT horns) 🙂 . The train switched from the mainline (seems PF1 is on the mainline towards NCJ) to the PF2 loop just before PF1! :O By the way, the rake (belonging to SWR) looked battered! 😦 There were RPF stationed on PF1 to control the unreserved crowd of Nellai express. At 19 15, the EOG was switched off and the rake was powered by HOG. There were a few unsavoury points about our experience in this train that I shall discuss towards the end. Meanwhile, 16127 MS-GUV express pulled into PF3 at 19 34 (4 mins late) with RPM WAP7 30341. We departed on the dot (at 19 45), after the LP sounded the LT horn followed by the HT horn – both pure P7 (I could hear the horns clearly since our coach was 4th from the loco 🙂 ). After slowly crossing over the points, we accelerated and the LHB track music was a treat to the ears 🙂 .

Meanwhile, our tickets were checked. We crawled a bit before crossing 56741 TN-TEN passenger at Talaiyuthu; following which we accelerated to MPS and blasted through Gangai Kondan and Naraikkinar (there was a big curve to the right before this station), before skipping MEJ at 20 15 at a good pace; LT horns blaring all the way 🙂 .

Sped through settlements, LCs, coconut and palm trees and bushes; before slowing down for a TSR. We passed a rainfed lake before accelerating and skipping Kadambur. There were some strange, jarring sounds as we accelerated. The town of Kovilpatti loomed before we entered the station at a decent speed and came to a halt on PF1 (on the mainline) at 20 47, 14 mins late. It was bustling with people.

An announcement was made for 56825 ED-TEN passenger to arrive shortly on PF2. We had to wait for it to arrive before we could depart; since this is a single line section (upto MDU). Anyway, the train soon pulled in behind AJJ WAP1 22026.

We finally left after a stop of 8 mins. Ate our dinner – I had puris with aloo, as well as a bit of rava dosa. We crossed a bridge over a dry river as well as many settlements and an LC with a lot of vehicles; before reaching Satur at 21 15, 21 mins late. After a halt of 2 mins, the WAP7 showed its acceleration prowess and we soon hit MPS before slowing down for a TSR over a small bridge. Then we accelerated rapidly and blasted through Tulukapatti before slowing down again. Then the process repeated before we arrived at VPT (PF1) at 21 43, 25 mins late. The indicators showed that 12694 TN-MS Pearlcity express (hot on our heels) was to arrive on PF2. 76837 KKDI-VPT DEMU had arrived on PF4. We left after a stop of 2 mins. I noticed that there were railings on the right of the track in many places. We accelerated quickly to MPS before slowing down and skipping the ghost station Sivarakottai. Then a town loomed, followed by a sleeper factory; before we ripped Tirumangalam at MPS, honking all the way.

We passed an Indian Oil factory, followed by many huts and cottagess, a temple, a water tank and an LC; before making an unscheduled halt at Tirupparankundram on the mainline for 5 mins. Then the city of Madurai shone brightly with 2 major bridges and Hotel Sree Devi, before we were once again held up at the outer for another 5 mins. The line from Manamadurai joined on the right and I spotted ED WAP4 22729 in a siding before we pulled into a packed PF1 at 22 40, 25 mins late. There was a golf cart moving fast; packed to the brim with passengers! :O Meanwhile, I called it a day and clambered to my upper berth. As I didn’t fall asleep immediately, I noticed that we had a long halt. Woke up twice during the night to answer the call of nature – first around 01 15, when we were halted at TPJ home signal and a train hauled by a diesel with the traditional ALCO horn (“baaam”) overtook us in the distant right – I wonder which train that was ? :O . The 2nd time was when we had a long halt at VM and departed with the HT toot blown. 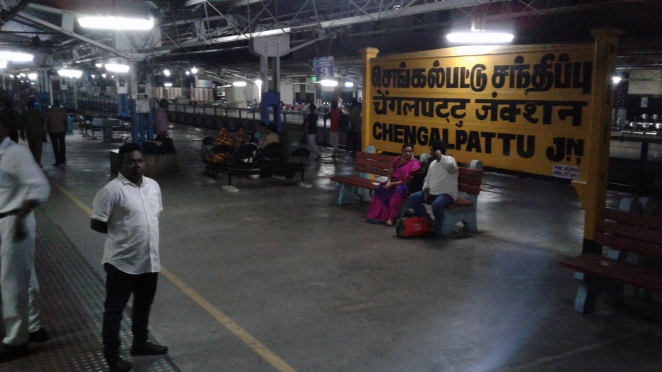 After passing the beautiful Kolavai Lake, we started blasting away and ripped Singaperumal Koil at MPS before slowing down and crossing a freight. Then we picked up speed again and had a roaring run from Maraimalai Nagar till Urapakkam, passing Hotel Sera Grand at Kattangalathur and racing vehicles on the highway. Passed Hotel SRR Grand as well as scenery in the form of coconut, palm and eucalyptus trees. I spotted an Antyodaya rake at Vandalur. We crawled from Perungalathur till TBM home, before accelerating to enter PF5 of TBM at a good speed at 06 12; 18 mins late. After a stop of 4 mins, we started ripping pretty quickly and the LP had his foot on the accelerator till Saidapet; during which AM Jain college flew past us at Minambakkam. Reached MBM at 06 30, 16 mins late. We had covered the last 18 km in 14 mins at 77.14 kmph 🙂 . However, as we left after a halt of 3 mins; our troubles were only about to begin – since we had entered the “graveyard territory” 😛 .

MS is crammed with early morning arrivals from down South. After 05 30, the peak hour starts; as you have 16180 MQ-MS Mannai express arriving at 05 55, 12662 SCT-MS Podhigai express at 06 05, 12634 CAPE-MS superfast at 06 25 and 16852 RMM-MS ‘Boat Mail’ at 06 35; followed by our Nellai at 06 45. Even if one of these trains gets delayed, it affects all other trains. Apart from these arrivals from down South, you also have the departures of 56037 MS-PDY fast passenger at 06 35 and 12164 Chennai Dadar superfast at 06 45. Additionally there is the matter of the extended (from MS) 17644 COA-CGL Circar express arriving at MS at 06 30 and departing at 06 50! :O The crux of the problem is that MS has only 9 platforms (for Long Distance trains) and is saturated; with no place for expansion. Hence, platform allocation is usually a herculean task; often leading to trains being held for clearance at the outer or at an earlier station.

Coming back to our journey, we had a short unscheduled stop at Kodambakkam; departing with a beautiful and haunting HT toot (as opposed to the harsh LT snarl 😛 ). There was a TSR of 90 kmph before Chetpet, where 56037 crossed us with RPM WAP7i 30712. We came to a halt just as the passenger passed; and this turned out to be a painfully long one of more than 15 mins. It was only after 17644 Circar express rushed past behind BZA WAP4 22257 that we were finally allowed to move. Limped into PF6 of MS at 07 08, 23 mins late. We had covered the last 7 km from MBM in 35 mins at a staggering 12 kmph!! 😛 Moreover, ironically, 12631 Nellai had arrived at TEN exactly 23 mins early 2 days ago; thus this run of 12632 Nellai perfectly cancelled out that impeccable run! 😛 16852 Boat Mail had arrived on PF4 with a WAP1/4. 12662 Podhigai express had arrived on PF5. To add insult to the injury, the indicators wrongly showed our Nellai as expected on PF5! 😛 Anyway, we headed home in a Toyota Corolla car that had been arranged for our trip.

Things that put a frown on our faces during the journey