12110 Manmad Mumbai Panchavati express is an extremely popular commuter train – used by thousands of passengers mainly between Nasik and Mumbai. Recently the train got an LHB rake and there was a lot subsequent hype; unfortunately, the new LHB rake did not go well with many regular travellers; due to its cramped seating arrangement and lack of ventilation – which made the journey ‘hell’ for them.

By the way, I was one of those railfans who fell prey to the hype (before the complaints by the regular commuters) ;and thus decided to experience a journey in the LHB rake 😛 . Being the crazy railfan that I am, I reached MMR in the wee hours of the early morning of June 2nd; having taken 13202 LTT-RJPB express from Mumbai the previous night 😛 .  After some rather intermittent sleep in the waiting room on Platform 2; I washed my face, brushed my teeth and headed out to PF4; where the rake of Panchavati was shunted in by its loco – HOG-capable Ajni WAP7 30579.

The front EOG was silent, thanks to the HOG loco. My coach D2 looked smart both from the outside and the inside; the focus of the Railways on aesthetics quite obvious – though it was clear that the seating arrangement was not designed with comfort in mind 😛 . 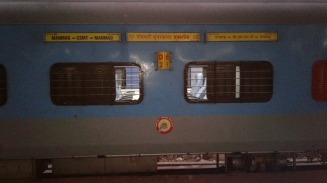 On PF1, a tanker train arrived led by NKJ WAG5-HA 23745 and WAG5-HE 24434 (with an unmarked and presumably dead WAG9 in tow). As we exited the junction, I saw a crane next to 2 Parcel Vans on the right; as well as the beautiful sight of the sunrise right behind us 🙂 . I also had a view of Siddhivinayak Nagar (with Jai Bhim flags flying tall) on the right. There was a bridge over marsh land full of stagnant patches of water. We soon accelerated to MPS, with the WAP7 losing no time in proving its might 😉 . The LT and HT horns when sounded together seemed like a diesel horn to me! :O I also loved the unique LHB track sounds. We blasted through Summit at 06 17 before a slight drop in speed. The soil of the region was of a dark brown hue; as we sped through huts, cottages, herds of goats, lambs and sheep looked after shepherds, vineries, LCs and a lot of trees. A small town showed up as we pulled into Lasalgaon at 06 26, 8 mins late.

A lot of people got in during the 1-minute halt here. We then crossed 51181 Devlali Bhusawal passenger hauled by chocolate brown KYN WCAM2-6P 21876. There were huge curves to the right as the P7 quickly (but smoothly) raced away to top speed again. We ripped through vineyards, sugarcane and maize fields, LCs, another bridge over stagnant patches of water (Vadala river), and coconut and neem trees; before pulling into Niphad at 06 39, 11 mins late. We had covered the last 17 km in 12 mins at 85 kmph; yet were more than 10 mins late – underlining the outrageously slackless schedule so far! :O On the right, a BCNA rake was standing (facing us) with BSL WAG9H 31356. Some people boarded here, before we departed after another 1-minute halt. Again we effortlessly accelerated to MPS – here is a compilation of the acceleration of WAP7 with this train (from outside MMR and from Niphad):

There was a bridge over  a dry river after Kasbe Sukene; before we zipped through Kherwadi at 06 49. The P7 was toying with the rake; the LP adding to my feeling of exhilaration (in the cool morning air) by constantly pressing the HT horn button 😀 . We raced through vineries, cactus plants and a lot of trees before Odha. Then there were huts, cottages, cattle, plantains, gulmohar trees,and a highway across us; before we passed the bridge over the murky Godavari river – meaning we had entered the town of Nasik. There was a really sharp curve; here I could finally see the loco hauling us! 😉 Then there was a TSR of 45 kmph; followed by Ashoka, Eucalyptus, Banyan and Neem trees, a factory (with boards marking it as a Prohibited place), slums, and another TSR of 100 kmph; before we pulled into Nasik Road station(PF3) at 07 03, 4 mins early 🙂 . We had covered the last 32 km in 23 mins at 83.48 kmph 🙂 . There was a massive crowd here, and our coach predictably got packed to the brim! 😛

Since I had not had a decent sleep the previous night, I dozed off in my seat for about half an hour. When I woke up, my ticket was finally checked! 😛 By the way, I was enjoying the speed and acceleration so far; but never left my seat – since the space was limited; though I could stretch my legs, people would have had to get up from their seats to make room for me – this I wanted to avoid. Meanwhile, there was a TSR of 85 kmph and the board mentioned “85 Sharp Curve” 😀 . There were huge (but arid 😦 ) mountains in the distant right, with a dam/bridge-like structure right at the top – which can be observed as a dark brown shade (in the 2nd pic). 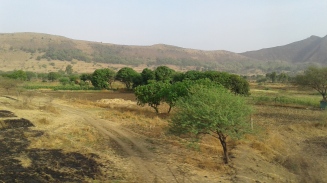 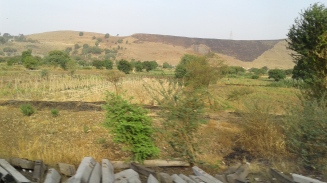 There was another TSR of 95 kmph, followed by many sharp curves; where I could see the loco as well as the rear of the train! 😉 We passed under a highway and a small town after Ghoti. Then there was a stream and tall mountain peaks shaped like plateaus.

Soon the town of IGP appeared – with a big mosque as well as a Buddhavihar. We arrived at the station at 07 53, 2 mins early 🙂 . On the right, 12618 Mangala express departed a minute later (1 hour 9 mins late) ; after a loco change from electric to diesel. In the distant right, 11067 LTT-FD Saket express arrived at 07 59; 6 mins late. Meanwhile, I will resume my account of the journey in Part 2 – hope it has been interesting so far! 😉

One thought on “My first tryst with LHB Panchavati – Part 1”