Since when I have found train journeys “dreary” or “forgettable” ? Well, this one by 11044 MDU-LTT express was a notable exception. It is a weekly train with oodles of slack at quite a few points in its schedule:

I am not counting the slack right towards end of the destination; as it is present in nearly all trains. However, adding up all the slack I’ve mentioned; it comes to 10.5 hours for a paltry distance of 267 km – at a measly average speed of 25.42 kmph; something that would put even a passenger train stopping at every station to shame. Considering that the train takes 35 hours 45 mins to cover an overall distance of 1694 km (at an average speed of 47.38 kmph) between MDU and LTT, you can imagine the scope of speeding up it has – IMHO at least 4 hours can easily be shaved off the schedule; this is after taking into account the slack necessary for overcoming delays likely to be encountered in the single line sections in between GR and DD (and the one between CGL and AJJ) that the train has to traverse. Besides, the train has a total of 24 stops; which is not a lot for such a huge distance.

Anyway, I am talking too much 😛 . However, you can now understand why a journey by this train would be dreary even for a hardcore railfan 😛 . Especially when it is in Sleeper Class and in the month of May. As it is, I was already tired; after the travel of the last one day or so – which involved a more than 9 hours overnight AC Semi-Sleeper bus journey from Chennai to Karaikudi, the travel between Karaikudi and Devakottai (to meet the mother of my best friend); and another bus journey (2.5 hours) from Karaikudi to Trichy. After an early dinner at a Cafe near TPJ, it was time to board 11044 on the night of 5th May – in order to reach Mumbai on the early morning of Monday 7th; so that I could then report to office at 9 am like any other day! The plinthed steam engine near the station was a sight for sore eyes on a sultry summer night. 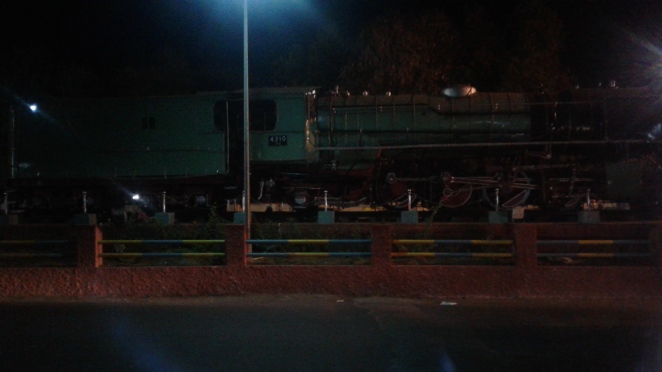 The station building was neat and simple, with a host of vehicles at the exit. 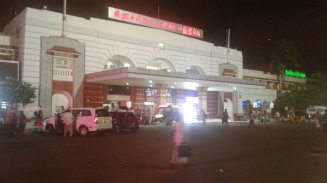 I didn’t really need the bedsheet I had brought (the weather being so sultry); moreover I had to try quite a few different positions in order to sleep comfortably in my SUB – which didn’t allow my to stretch my legs fully, given my height. Lesson for me: never book Side Berth in Sleeper Class henceforth (unless it is a daytime journey)! Also, the AJJ maintenance block (https://www.irctchelp.in/2016/01/all-special-train-blocks-updates-2016.html) had affected this train too – we were diverted via VM-Tiruvannamalai-KPD-Melpakkam-AJJ bypass-RU! I could sense that we were stopped for quite a few crossings in the single line section between VM and KPD – in the middle of the night. I woke up around 07 55; to find our coach quite crowded – predictably, with many unreserved passengers. I had a tough time trying to find my sandals around all the luggage placed; ended up cursing a lot before I eventually found them in the adjacent side bay – apparently they had been placed there accidentally by the OBHS staff.

Anyway, this was an early indicator as to how the rest of the journey would pan out – more on that later! I washed my face and brushed my teeth. The sidebay had to be shared with two people instead of one (as mentioned earlier, due to the prevalence of unreserved passengers in the coach); it was just as well that I had a trackside emergency window seat – though I resisted the temptation to push the blood red bars up 😛 . It seemed our coach had a flat wheel at the front. We passed through greenery with  lot of plantains, mountains in the distant right, a lot of buildings, huts and cottages, and a highway across us; before pulling into Razampeta at 08 22, 14 mins late. So it seemed the route diversion had not affected us a great deal! Well, slack does have a few benefits after all 😛 . After a halt of 2 mins, we overtook 57274 TPTY-UBL passenger standing there behind GY WDM3D 11338.

Meanwhile, more repercussions were slowly coming out from the AJJ fiasco. My grandmother’s sister was to travel in 12027 MAS-SBC Shatabdi the previous day – she had reached MAS at 16 30, an hour before the train’s departure. Then she had to wait for  about 4 hours in the AC waiting room – the train ultimately being rescheduled by 5 hours; before heading into a queue which turned out to be complete chaos – as there were hundreds of people (along with her) in line to cancel their tickets (for various other trains)! To top it all, the staff rudely told my grand-aunt that only I could cancel the ticket; since I had booked it! There was also no point in going ahead with the  trip since the train would then reach SBC at a very odd hour. Thus she had called me the previous night regarding this affair; at that time I was unfortunately lying on my SUB!

Only that morning (after doing my usual routine) I saw my grand-aunt’s messages and then tried to log into the IRCTC website through my mobile data; it took a lot of time as the network was weak. I could not cancel the ticket (since the journey date had already passed), but somehow managed to file a TDR under the reason “Train late by more than 3 hours and passenger not travelled”. Coming back to the journey, we crossed a BOXN freight from which twin WDG4s (Trailing – 12145 of UBL) were detached. We then overtook a BOXN rake with VSKP WAG9H 31986 at Yerraguntla through the loopline. There was a PSR of 30 kmph for the UP loop. Then there were huge mounds of stone and granite waste, big pits and some stagnant water. We also crossed a light WAG9; and then  overtook a twin WAG5 hauled BOXN freight, as well as a WDG4 hauled freight; at MPS, at Kalamalla.

There was a factory with towering chimneys and 5 tall cooling towers (similar to that of RTPS) in the distant right. The freight action continued unabated as another BOXN rake hauled by twin WDG4s crossed. An electrified line joined us on the right. We overtook yet another BOXN freight on that line led by twin maroon brown AJJ WAG5s 23537 and 23274; as it entered Muddanaru. Then there was a small bridge followed by huts and cottages, and a highway across us under construction. There was also the usual scenery in the form of bushes and shrubs, a hill in the distant right; and Neem, Peepal and Palm trees. The huge windmills on the hill stood out amidst the otherwise drab scenery. Then there was an LC with many vehicles, and a road gave us company briefly on the right. There were a lot of buildings, huts and cottages, a church, a water tank, a temple, and a small bridge; before Mangapatnam.

From here, the region seemed to become more a bit more fertile; as seen by the rows of tiny trees, coconut trees; and a lake and a rain-fed pond in the distant right. However, this was immediately contrasted with some thorny plants as well as bushes and shrubs. There were gangmen at work on the right track, before we reached Kondapuram for our first watering halt; which lasted 11 mins. Then there was a TSR of 90 kmph, followed by 4 water tanks and an industrial unit. We crossed the bridge over the dry Chitravathi river (wonder how the water at the station is sourced, if the river is dry? :O ), followed by green watered fields and coconut and palm trees. There were more rows of small coconut trees as well as a shepherd leading a flock of cattle at Regadipalli. This was followed by another highway across us under construction and some quarrying work; with excavators and bulldozers. Also small cottages were being built.

There were small cottages, a temple and some firewood stacked up at Vanganur. We crossed an express behind a WAP4. Then there was another bridge over a dry river, followed by trees and an LC. There were big factories at Challavaripalli as well as a mall bridge. An electrified line from the factories joined at the station. There were a lot of settlements in the distant right, a church, more stone waste, a rather run-down HMP Co. Ltd unit and a highway across us; before we entered Tadipatri. There were buffaloes on a platform being constructed in the right. We accelerated through the mainline to pass the station without stopping. Then there was arid land; which was why I was surprised to see a brown deer with tall horns! :O There was yet another freight at Komali, followed by two small bridges (again!) and another road giving us company for a while. We also crossed another express before the bridge over the (not surprisingly 😛 ) dry Pennar river. We had an unscheduled halt of a minute at Juturu, where a shepherd was leading goats and sheep to graze. There was also an electrified line branching off to the right.

There was another electrified line (bypassing the station) which came from the right.

I would dearly love to know more about these lines! Meanwhile our EMD beast smoked up as we accelerated out of the station. There was a girder bridge, followed by bushes and shrubs, more stone waste, another highway across us; and (again!) mountains in the distant right. I saw the Lions Club of Rayalacheruvu, which looked impressive. After Jakkalacheruvu (where there was a track-level platform) the landscape became less arid again; with coconut groves, palm trees; and goats and lambs grazing. The approach to GY was signalled by a BPCL Plant, a Prohibited Area nearby, ballast stacked up along with a bulldozer at work on the left; and a lady shepherding buffaloes with a man in tow. We crossed twin WDG3As (trailing – 13067 of GY) before arriving at the junction ay 11 54, 11 mins late. At this point, I am sorry to stop; since it has become exhausting to write this much already! 😛 Fear not, you may not have to wait long for Part 2. Happy reading till then!

One thought on “A long, dreary and forgettable journey – Part 1”