Where were we? Ah…at SUR; 18520 LTT-VSKP express having followed us all the way. To refer to how this began in the first place, please refer https://ashwinkumar1989.online/2018/05/11/rescheduled-train-blues-part-1/ . 11018 KIK-LTT express arrived on Platform 5 behind an EMD (with an electric type LT horn) at 15 10, 20 mins late. As I feared, 18520 finally overtook us here. Meanwhile, KYN WDM3D 11355 shunted our slip coach S10 to PF2 – this coach had been attached to the rear of our train at Daund; coming from 11040 Gondia Kolhapur Maharashtra express – 11040 arrives at Daund at 02 45. 11027 is supposed to depart Daund at 05 05 as per schedule; so this would usually mean a close to 2.5 hours wait for passengers travelling in the slip coach. However, with 11027 being rescheduled by 4 hours and further getting late by more than an hour on the way; the wait for these beleaguered passengers would have more than tripled. Ah, the domino effect a maintenance block at AJJ more than 1000 km away can wreak!! :O

Meanwhile, the BCNA freight on PF4 departed towards Pune. I was already feeling sleepy after the lunch and our train’s progress added to that 😛 . So I retired to my UB. When I finally woke up about 2.5 hours later, we were speeding through small forests, meadows and a village with lot of stone cottages, temples and cemeteries. Reached Shahabad at 17 56, 5 hours 43 mins late. Nearby, I saw Dr. Ambedkar Nagar on the right with Jai Bhim flags, a Buddha statue and boys playing cricket. We crossed 16382 CAPE-CSMT Jayanthi Janata express with mega-offlink SPJ WDM3D 11495; my friend railfan Jyothish KD had seen its counterpart 16381 with the same link a few days back! :O Then came the perennial Kagini river (the board read ‘Cognee’). 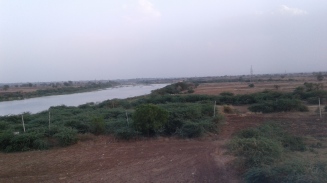 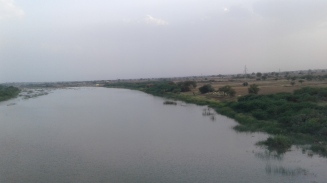 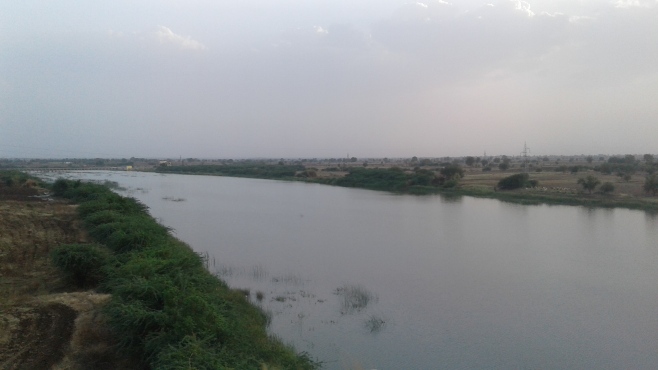 Now there was a TSR of 30 kmph over the bridge; earlier the trains used to speed through 😦 . There was a Steam Chamber in the Sleeper factory on the left. Saw twin KYN WDG3A Shaktis in a siding. There were many BCNA rakes as well as a BOXN rake in the yard on the left, as we approached Wadi. Pulled into PF2 at 18 12, 5 hrs 22 mins late; having made up some 20 mins due to slack. On the right was 12702 HYB-CSMT Hussainsagar express with a massive offlink; twin WDG3As – 14675 of VSKP trailing. It seemed to be a day of offlinks! 😉  To our irritation, lights were not working in our bay for a brief while – to add to the already messed-up schedule of the train! 😦 Our EMD was detached, and the electric loco to take over all the way to MAS was AJJ WAP1 22013. 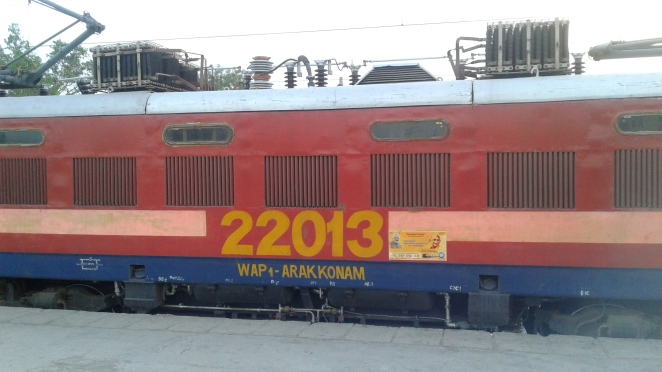 There was a delicious irony in the fact that the loco to haul us till our destination belonged to AJJ; given that AJJ was the source of all our troubles! 😛 Meanwhile, I was able to capture the KYN Shakti twins that I had seen earlier – WDG3As 13579 and 13571 (non-DBR). 13579 had a really sharp HT horn. Also, the locos seemed to be coupled the wrong way – the Short Hood of 13579 was coupled to the Long Hood of 13571. 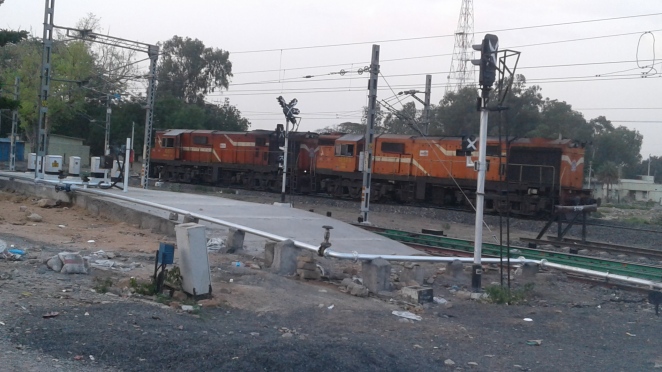 We departed at 18 33 (5 hours 38 mins late), after a long halt of 21 mins. Saw BZA WAP4 25033 and another brick red WAP4 on a siding in the left. We crossed a BOXN freight headed by twin blue WAG7s before Nalwar. Passed through meadows, small forests, a viaduct on a road in the distant left, a town with a lot of huts and cottages, and mountains in the distant left; before Yadgir. Now it was really dark and there was hardly anything to see outside the glass windows. So I settled down into reading “Stardust and Fire”, a book of poems by Neha Kabra; a very well-known poet and a friend of mine. We had a watering halt at Krishna station in Telangana.

I heard some ALCO chugging and saw an ACC Cement rake crossing – the chugging could be heard long after the train skipped the station! 🙂 We departed at 20 10, 5 hours 55 mins late. Saw two Plasser machines in a siding on the left. There was a TSR of 80 kmph before the bridge. The river was only 50% dry 😦 . Meanwhile, I went to the loo and found that the water from the taps was quite warm; thanks to the summer heat! 😛 There was a brief unscheduled stop at Yadalapur on the mainline. I had a Veg. Thali for dinner – it consisted of 3 Chapatis, Jeera rice, Dal and Chana Masala; and was quite satisfying. The total fare (lunch and dinner combined) for me was Rs.190 (70 for the Veg. Biryani and 120 for the Veg. Thali) – however, inexplicably; the pantry guy didn’t have even Rs.10 change (which is supposed to be basic!) and so went to other coaches to obtain the change! :O The wait was really annoying, since we were all looking forward to sleep.

It turned out that the whole change fiasco was a red herring, as the pantry guy eventually returned with one of his fellow staff; who had apparently complained about one of my co-passengers refusing to pay the fare – since he found the fare too high (as against the official IRCTC food rate list and menus – https://www.irctchelp.in/irctc-latest-food-menu-rates ); and some of the food items he had asked were not provided. However, I was not really in a mood to argue with the staff in favour of my co-passenger; I was just tired and retired to my UB after paying the fare for the food I had ordered. Had a solid sleep of close to 10 hours. After I did my usual morning routine; we were speeding through the Chennai suburbs – blasted through Sevvapet Road. We overtook locals at Pattabiram, Avadi and after Villivakkam. Crossed a freight before pulling into Perambur at 08 21, 5 hours 28 mins late. Here predictably the coach almost emptied.

I spotted AJJ WAG7 28680 and ED WAP4 22665 in the BBQ Trip Shed. Saw LGD WAP4 22515 in the right as we finally crawled into MAS. There were twin APU-fitted TNP WDM3As (trailing – 16882R) on the right – most probably assigned to 22601 MAS-SNSI superfast. Came to a stop on the customary PF1 at 08 41, 5 hours 11 mins late. Not bad – we had been rescheduled by 4 hours and got delayed by an hour further in Maharashtra itself; and then mostly maintained the overall 5+ hours delay throughout. There was a long walk from my coach till the terminus exit; the coach being at the rear of the rake. Then I had to walk a while further to Park Town station after crossing the road. There I took an MRTS local till Thirumayilai (Mylapore) after standing in a long queue to get a ticket – I didn’t get a seat, but there was quite enough space to stand with my luggage. After that it took a 10-15 mins walk to finally reach my home around 09 30. It was a really long journey, but the AC comfort took away most of the potential hardships. Hope you were not bored by this long blog containing 2 parts! 😛