Do Not Underestimate the Deccan Express!

11008 Pune Mumbai Deccan express is not a very fast train – it takes 4 hrs 2 mins to cover a distance of 192 km; an average speed of 47.6 kmph. It also has 9 stops i.e. an average of almost a stop every 21 km! 😛 However, these stats are not enough to dismiss the train as a crawler; as I found out on Sunday 22nd April. It was berthed on Platform 5 of Pune; and doing the honours was chocolate brown KYN WCAM2-6P 21861.

There were plug points in all bays, and the cushions and curtains were of a pleasing maroon brown hue :). The coach had last gone for POH in March 2017. I had a non-trackside window seat. We departed right on the dot, at 15 15. The departure horn was interesting – there was a shrill as well as melodious HT horn mixed with an LT horn! :O I saw Pune WDP4D 40265 in a shed in the distant left. A family got in during the 1-minute halt at SVJR. There was some weird noise coming from the AC for a while, as another family got in at Khadki. Soon we were blasting away before slowing down at Pimpri home signal, but again accelerating through the station. At Chinchwad, there was a local on the left and a Plasser machine on a siding in the distant left. We ripped through the outskirts of Pune, passing Akurdi in a blur.

Meanwhile, my ticket was checked – I showed the TTE my ticket SMS as well as the photo ID proof (My Driving License). The shrill HT horn and the LT horn were used more often; with the melodious HT horn being used occasionally. Reached Talegaon at 15 57, 2 mins late. We had covered the last 28 km in 24 mins – at 70 kmph :). The humble express had started showing us what it was capable of :D. Some people got in during the 2-min stop here. I had a nap. When I woke up, we were pulling into Lonavala at 16 25, 3 mins early. 3 families got in during the 8-minute halt, and the coach was almost full now (it had been almost empty when I boarded) :O! We stopped very briefly outside the station for just 10 seconds, before taking the UP line; beginning our descent down the Bhor Ghats. There was a multi-storey car park on the left before Khandala.

Then came the real thrill of the ghats, with many tunnels as well as breathtaking views of the valley – including forests and the mountain roads with their numerous hairpin bends :). After the customary brake-testing stop at Monkey Hill, we surprisingly switched to the Midline! :O After the halt for train staff at Jambrung, we were again treated to panoramic views of the valley as well as the road connecting Karjat to Khopoli :). 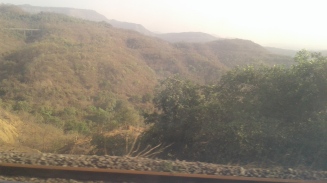 The last pic was a fluke shot – thanks to a stroke of luck that caused the hazy view from outside the AC window to be transformed into that of mountains being reflected! 😛 Arrived at Karjat at 17 32, 14 mins late; just as 11019 CSMT-BBS Konark express departed. There was a Mirinda orange and cream Pune WDM3D 11370 in the distant right. After a stop of 3 mins, the LP decided to set the pace right away; and we blasted through Bhivpuri Road with continuous and melodious HT honking.  Then we slowed down to pass through Neral at a sedate pace, before picking up the pace again from Shelu home. This time there was no let up. Badlapur, Ambernath and Ulhasnagar zoomed past us in a blur; with the chief having his fingers on all the 3 horn buttons!! 😉 We finally slowed down at Vithalwadi home before entering KYN at 18 11, 9 mins late; on PF7.

So we had covered the last 47 km in 36 mins at an average of approximately 78 kmph!  An LHB train departed the station just as we entered. As we left after a halt of 3 mins, the chief was not done yet! We had a thundering run (again with liberal use of both the HT horns!!) till the Diva LC, where there is a PSR of 50 kmph; during which we overtook two locals. The speed restrictions in the Parsik Tunnel seem to be in place again, as we crawled; and I could see water dripping from the roof – no wonder! 😀 We entered Thane at 18 33, only 5 mins late; on PF6 – just as 11023 CSMT-KOP Sahyadri express skipped the station behind another chocolate brown KYN WCAM2-6P. I got down here and boarded a local towards CSMT. Saw an elusive KYN WCM6 20187 (AC converted) in blue WAG7 livery at Mulund yard. Then I took an auto from Vikhroli to reach home by 19 30. Thus ended an eventful journey during which Deccan express had shown that it is not a train to be underestimated; thanks to the rockstar loco 21861 and of course a rockstar LP! 😉