A classy journey by the Tejas – Part 2

It is hard to write about a journey by a premier train (that too traversing Konkan Railway) like Tejas express in just one post – so there had to be two parts! For the first one, please refer https://ashwinkumar1989.online/2018/04/17/a-classy-journey-by-the-tejas-part-1/ . We had departed RN at 17 28, 8 mins late. There was an Accident Relief Medical & MFD Tool Van in a shed in the distant left. Then came a big curve to the left, as we chugged and smoked out of the station limits. After that was a big viaduct with some stunning greenery, followed by 2 long tunnels (only 2 out of totally 22 tunnels between RN and Chiplun alone! :O ) as we quickly picked up speed and started blasting away. Then we crossed GOC WDP4D 40133 with 12218 CDG-KCVL Kerala Sampark Kranti express at Bhoke at a good speed.

This was followed by the famous Karbude Tunnel – 6.5 km long and the 3rd longest tunnel in Indian Railways 🙂 – excuse the video quality as the view from inside the AC coach was almost totally dark; moreover we aren’t allowed to open the doors in this train! 😦

Then came Lajul viaduct over a dry stream with a few stagnant patches of water. There were a few tunnels and another viaduct over a dry river before Ukshi; where gangmen were busy at work. There was another very long tunnel before a beautiful river, followed by a viaduct over a twisting and turning mountainous road. After a few more tunnels and another viaduct over a road, we passed Sangameshwar Road at 17 57; crossing a BCNA freight on the left and an express on the right. The viaducts and tunnels continued unabated, along with greenery everywhere 🙂 . There was also another stream with stagnant water where some people were bathing. Then we blasted through Aravali Road at MPS – the kid nearby screaming ruins the end of the video 😛 .

Then came another viaduct over a partly dry river along with more tunnels, and a TSR of 75 kmph; before ripping Kamathe at MPS at 18 18. After another long tunnel, the scenery changed as the town of Chiplun appeared – with many houses, buildings, a Honda Motor showroom and a highway. This was followed by the beautiful sight of the setting sun over the famous Vashishti river 🙂  – in the 3rd pic you can see the road bridge as well. Here the river is somewhat murky; no doubt owing to the urban influence 😛 . 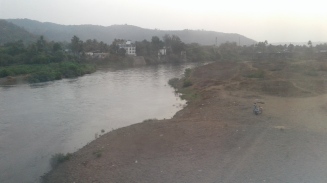 In the yard, there was a big shed in the distant left comprising Plasser machines. There were also cranes and a huge pile of sleepers stacked up, as well as gunny bags loaded on a rake. Additionally there was the Indian Oil Plant. We pulled into the station at 18 28, 10 mins late; coming to a stop on the platform in the right. On the left, 12618 NZM-ERS Mangala Lakshadweep express arrived behind GOC WDP4D 40115; running more than 5.5 hours late :O . To complete the picture, the rake looked very old and battered 😦 . Some people got in our coach. We departed after a halt of 7 mins. After two tunnels, we were treated to the sight of the same Vashishti river in an entirely different light 🙂 .

Then we crawled through Anjani for a TSR – doubling work was going on, with land being levelled. Meanwhile, tomato soup was served with breadsticks and butter 🙂 . We stopped in one of the tunnels, before accelerating through Khed at 19 05 – crossing a route-diverted (due to doubling work in the KWV-SUR line) CSMT-NCJ express behind ED WDP4D 40485. Then we crossed a freight led by a WDG4D at another station. The dinner was extremely tasty, but also quite heavy – comprising jeera rice and 3 chapatis with Dal and Paneer mutter. I particularly loved the sweet (Sheera). Another highlight was the Solkadhi – a Konkani speciality 🙂 . We had another unscheduled halt at Roha for less than a minute. After we departed, we stopped again for half a minute. There was nothing much to see outside the window; so I slept intermittently for a while.

When I woke up, we were blasting away with nothing to hinder us; having left single-line territory. There were a lot of bridges, buildings, roads and highways. Reached Panvel (Platform 5) at 21 29, 4 mins early 🙂 . I got down here, along with quite a few people. Then I took a Harbour line local to Kurla. As we exited the station, I saw a WAP5 in the yard on the right; as well as an ACC Cement freight towards Panvel.  Another thing that pleased me was the progress on the Metro rail near Belapur CBD. At Kurla, I took another local to Vikhroli and then an auto to reach home by 11 pm. Thus ended my first trip by Konkan Railway this year – capped by an extremely classy journey by a classy train – Tejas express 🙂 . Hope you enjoyed this blog as much as I enjoyed the journey! 😉