The start of a whirlwind trip : Part 3

There was an interesting ‘Stop’ board attached to the old (1994 made) front SLR of our train.

I slept for more than an hour in my SUB; as I felt drowsy due to the combination of the heavy lunch and the AC effect 😛 . When I came down, we were having a long halt at Raichur. We then crossed a BOBYN freight hauled by GOC ALCO twins before Marichethal; after which there was a TSR of 90 kmph. At Matmari, there was a monkey sitting on the rightmost track! :O Then there was scenery in the form of fields with white flowers, corn fields, rocky man-made hills, tall stacks of hay near cattle; and goats near a line of clothes left to dry – before we crawled through Hanumapura. There was a tractor with a cart at the LC, and a dirty and stagnant pond. After a few irrigated green fields, there came the PSR of 70 kmph before the Tungabhadra river. 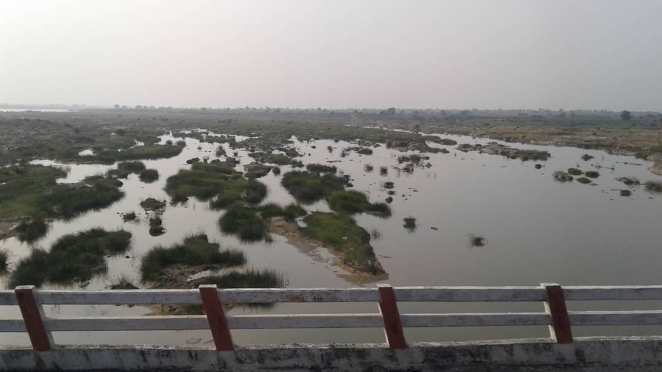 Then there were eucalyptus trees and a sleeper factory before we pulled into MALM (Platform 1) at 16 18, 1 hr 9 mins late. A few families got in here. My seat number was 12. An elderly lady (who boarded here along with her husband) had been assigned seat 11 (SLB); and her husband had been assigned a seat at the other end of the coach. As per the lady’s request (so that the couple could be together in the side bay), I gave up my seat; instead moving to seat 47 (which was a vacant SLB 😉 ). There were pigs in the tall grass growing outside the station. 12164 Chennai Dadar ‘Super’ express arrived about 40 mins late on PF3; led by offlink BSL WAG5A 23574 in a maroon-silver livery (with blue stripes). We finally departed at 16 35, after a long halt of 17 mins. There were palm trees at Iranagallu, followed by an LC with lot of vehicles, an unmetalled road, an excavator; and brick huts.

An SR train with 4 AC coaches (probably 16614 CBE-RJT express) crossed us before Kosigi, led by a blue APU-fitted ALCO. Then there were more rocky man-made hills, coconut and palm trees; and arid land interspersed with bushes and shrubs. An EMD-hauled train with 4-5 AC coaches then zoomed past us, before we pulled into Kupgal at 17 04, 1 hr 15 mins late. Here there were RVNL boards on the platform, and a lot of monkeys! :O On the extreme right, there were a few coal-laden wagons and a caboose. As we exited, there was a temple and another LC with lot of vehicles (mainly two-wheelers). The rocky man-made mountains continued to surround us in the distant right, along with white-flowered fields, a lot of huts and cottages; as we skipped Isivi at MPS. Then there were factories and warehouses, as well as more huts, cottages and shanties; and a church and a mosque.

The approach to Adoni was marked by a highway across us, buildings such as VRL Logistics, Sai Mill, Religare, Mani Wines, Sri Pavan Agrotech, another factory, Hero Motocorp Showroom; lorries on the road, another highway across us; and a BCNA rake in the distant right. As we left at 17 22 (1 hr 4 mins late) after a halt of 3 mins, I saw twin GTL WDG3As 14943 (APU-fitted) and 13254 idling with a solitary ER caboose. There was a PSR of 15 kmph on a freight siding. Then there was an LC with two-wheelers and a water tank in the distant right. We crossed a BCNA freight led by twin blue WAG7s (Trailing – 27728 of KZJ). Then there was more scenery in the form of corn and wheat fields (in which women were busy working) and bushes and shrubs, before we pulled into a scenic Nagarur – with trees everywhere, as well as growing grass and bushes. There was also ballast piled up in the distant right.

There was a TSR of 75 kmph after the station, followed by another LC. In the field, a group of boys were piling hay on a cart. We crossed a covered BOXN rake led by twin WAG7s (Leading one in blue livery, Trailing one in Tigerface livery), followed by lots of goats and sheep shepherded by farmers; and another TSR of 75 kmph – before we made an unscheduled halt of a minute at Aspari, on the mainline. This gave me an opportunity to capture the setting sun 🙂 .

Then there were small ponds, corn fields, windmills in the distant right; and bushes and shrubs – before we made another unscheduled halt at Molagavalli (again, on the mainline) for a minute. There was a share-auto outside the station, followed by an LC with a tempo and two-wheelers. Then there was countryside scenery again, in the form of lots of goats and sheep grazing, corn and wheat fields, two small ponds, farmers (men as well as women) at work, sunflowers; and bushes and shrubs. There was a TSR of 50 kmph in the UP line after Nancherla. We then had yet another unscheduled halt of 9 mins at GTL home signal. There was a canal, before we passed an EMD-hauled tanker train waiting on the GTL bypass line coming from Bellary.

I helped my uncle settle their luggage (through a porter) – part of it under my seat, another part of it in the main bay opposite my side bay; and the hand baggages with my uncle and his family, in the adjacent main bay. Then I had an early dinner (Chapatis with Channa Masala) duly delivered by https://www.railrider.in/, through which I had ordered online! 😉 . This time there were two spoons, though I didn’t require any spoons at all! 😛 18048 Amaravathi express departed before us, from PF4; with a burst of HT as well as LT horns. We finally left at 18 51 (with many blasts of the HT horn) after a long halt of 20 mins, during which the coaches were cleaned thoroughly. Meanwhile, I had a chat with my uncle and aunt. He works for WR Mumbai division at their Churchgate office; earlier he used to be a motorman \m/ .

Because of my uncle’s employment in Railways, he has a Pass for AC 2 Tier; which he used along with his family here. They preferred to take 3 trains from Mumbai to Chennai, to avoid the boredom of travelling in the same train for 2 nights and a day! Moreover, 11027 goes to MAS; that too in the wee hours (03 30) – at that time, it is almost impossible to get a bus to their home far away in south Chennai; and the auto-rickshaws are known for their exorbitant rates; especially at such odd hours. Also, 11043 (which would have probably overtaken 11027 sometime back in the morning! 😛 ) doesn’t go to Chennai; it only goes to CGL and then to AJJ via Kanchipuram. Hence they preferred to take 17652 (from GY) which goes upto TBM (from where their home is close by) at a convenient time (08 13). In the process, they took 11027 for a very short distance – merely 29 km! :O

I helped my uncle unload all their luggage as we reached GY at 19 19, 55 mins late. They had a lay-off of more than 3 hours at GY before boarding 17652 – ample time for some rest as well as dinner. Meanwhile, I read the book “My Father Baliah” by Y.B.Satyanarayana; given by my younger cousin in Chennai. This is a heart-rending true story of a Dalit family in A.P and Telangana. By the time I went to sleep on my SLB, it was around 20 30. Predictably, due to this train’s huge slack; we reached MAS (PF3) at 03 15, 15 mins early! 😛  I then got an auto to reach home in less than 20 mins. Thanks for patiently reading this long blog of 3 parts!