Double – decking it to Bangalore – Part 2

Where had I left off ? Ahh…when we exited SR and moved into SWR – on leaving JTJ! As for the MAS-JTJ portion, please refer https://ashwinkumar1989.online/2018/01/10/double-decking-it-to-bangalore-part-1/ . Any difficulties understanding technical terms and station codes, please refer to the legend right at the bottom (Can’t promise to resolve all doubts though!). 12610 SBC-MAS Intercity entered JTJ as we departed. The line to CBE branched sharply to our left 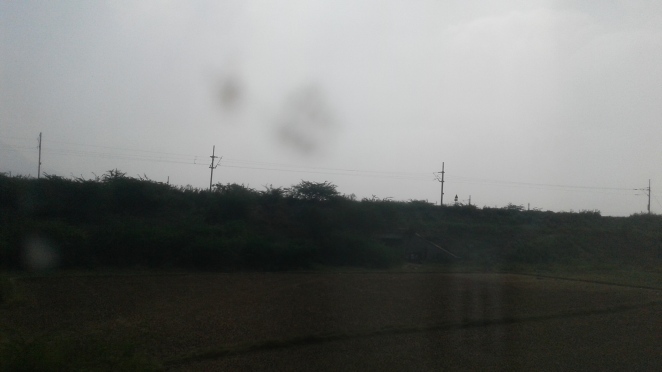 A road gave us company on our left. There was a sharp curve to the left and a TSR of 75 kmph before Somanayakkanpatti. Every time we curved sharply to the left, I could see the trailing coaches and the rear EOG – it was a real treat to the eyes! There was again scenery in the form of coconut groves, palm trees, plantains, different kinds of fields, huts and cottages. Now the AC was getting really cold! A highway crossed over us and there was a gradient and another big curve to the left, before we had an unscheduled stop at Patchur for 7 mins! On the left, there was an LC where a lot of school students had gathered. On the right, a train hauled by a WAP7 crossed us at a brisk pace. The ghat section to Mulanur was about to begin, and we were also moving from Tamilnadu to A.P. We moved at a slow pace, which gave me time to capture all the wild scenery on offer.

Here is the video of the ghat section (in this though, we are blasting away 😀 )

There was yet again a huge curve to the left before Mulanur, where the steep climb ended. However, the scenery continued in the form of an eucalyptus grove, a pond in the distant left, a row of tent houses, coconut groves, a tractor moving through slush and a lady leading a herd of cows. The sights of a highway passing across us, a road under us, temples, cottages, huts, a mosque, shops, an LC and a rake carrying sleepers and AHS (don’t know what that means!) signalled the arrival of Kuppam at 11 41, 42 mins late. There was an excavator laying sleepers on the track in the distant left. We had entered a partly rocky area. There was yet another big curve to the left and a beautiful lake on the right, as well as cottages and coconut and eucalyptus trees before Gudupalli – the curving to the left continued unabated here, and this was the beginning of a forest section that would last till as far as Devangonthi!!

At the next station Bisanattam, we entered Karnataka. There was a lake full of thorns after Kamasamudram, as well as a pond and goats and sheep grazing on the rocks. I could simply not resist snapping away, as there was so much wild scenery in the form of forests as well as meadows! 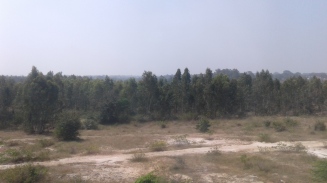 The third pic is currently my laptop background! 😉 There was another thorny lake.

There was yet another lake full of thorns and moss before we entered a scenic Bangarapet (full of trees) at 12 06, only 33 mins late now – thanks to a rapid run of 34 km in 24 mins – at an average of 85 kmph (again, child’s play for the P7 with its tiny load! 😛 ) . There were a few OHE Inspection Cars here. Our exit was marked by a coconut grove, some trash and sewage, another highway across us and an LC. There was a muddy pond, as well as a shepherd leading a flock of sheep to graze, and some buffaloes before Maralahalli – this station was at a rather high level! There was some marsh land as well, apart from the forests and coconut trees! We overtook a container freight led by an LGD WAG9 at Tyakal.

There was another muddy pond as well as some cottages and tents before we overtook an Adani Agri freight with twin WDG4Ds (leading 70600 of IZN) at Malur. Then there was a factory in the right, as well as some eucalyptus forests. 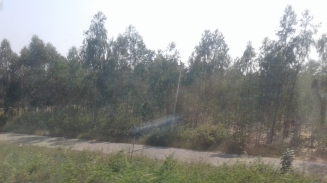 Then there was the last of the wild scenery in the form of teak forests, yet another thorny lake and coconut groves; before we overtook a container rake hauled by LGD WAG9H 31520 at Devangonthi. Now, we moved from forest land to an industrial zone. There was a cement factory, an FSC Industrial area, a JK Timber depot as well as a residential area (not missing an incongruous lake full of moss! 😛 ) before we blasted past Whitefield at MPS (a station which is a scheduled halt for my return train – 16022 MYS-MAS Kaveri express! 😛 ). There was a line branching away to the left (probably meant only for freights) , as well as maroon-brown WAG5s – 23630 of ASN and 23443 of AJJ – in the distant left. A line joined us from the left at the Whitefield Satellite Goods Terminal. There was a tall residential compound, slums, cottages and trash before we had another unscheduled halt of a minute at Hoodi home signal – we were entering SBC division’s graveyard territory!!

The suburbs of Bangalore presented themselves, in the form of The Brigade School, MLR Convention Centre, a petrol pump, DSK Benelli Showroom and Hero Motocorp Showroom before the next unscheduled halt of 6 mins at KJM home. Then there was a main road, Hyundai showroom, a major flyover and a vehicle parking lot before we limped into KJM at 13 00, 42 mins late. Then there was a rather forlorn looking Hilal Educational Institute, some trash and another highway across us; before an unelectrified line joined us from above on the left – this is the line from Hosur or YNK? There was another eucalyptus forest before BYPL. Then there were a lot of trees, cottages, some trash, a crematorium and a road underbridge before we were halted for 3 mins at BNCE home.

We passed a dirty black river, a ground for basketball and football, Frazer Town, a road underbridge and a flyover parallel to us; before pulling into BNC at 13 19, 46 mins late. I spotted AJJ WAP4 22806 on the left. The MSL here was 920.28m (approximately 3018 feet). We had a long halt of 8 mins. Half of the coach had emptied itself by now. We then crossed 5 road underbridges, Yadava College, Karnataka State Yadav Sangha and Renaissance building before the rake of 16315/16 SBC-KCVL express (being pushed backwards by a WDS6) had a parallel run with us. Finally entered SBC (Platform 6) at 13 37 – only 27 mins late thanks to slack. Spotted Pune WDP4D 40416 with the rake of 11301/02 CSMT-SBC Udyan express. Based on instructions given by my grand-uncle (who was one of the relatives in Malleshwaram I was to meet), I hired a prepaid auto from opposite the station. Reached Malleshwaram in less than half an hour’s time. Thanks for patiently reading this very long report!!!

CSMT – Chatrapathi Shivaji Maharaj Terminus (Mumbai CST with the ‘Maharaj’ in it! 😛 )