A Return Journey To Remember – Part 1

After a rather enjoyable trip of Chennai of a week, during which I met my maternal grandparents, relatives and friends; it was time for me to return to Mumbai – again by train! Oh, and for my account of my train journey from Mumbai; please refer https://ashwinkumar1989.online/2017/11/22/a-two-night-sojourn-to-chennai-part-1/ and https://ashwinkumar1989.online/2017/11/23/a-two-night-sojourn-to-chennai-part-2/ . This time, I took 11042 MAS CSMT express on Nov 25; which departs from MAS at 12 20 and reaches CSMT at 13 35 (I would get down at Thane) – this would enable me to rest for more than half a day at home before the usual Monday morning blues (heightened after a one-week holiday!) . As always, please refer to the legend at the bottom for all technical terms and station codes (not all, mind you!) . Non-railfans and purist railfans, I warn you in advance that this blog will contain a LOT of loco numbers and other technical stuff! Also everyone, this is so long that I have to split it into 3 PARTS so that it doesn’t get boring! 😛

My coach S8 was a very old 1996 old make, but surprisingly had mobile charging sockets in all bays and even bio-toilets at one end! :O It was 5th from the loco – AJJ WAP1 22011, and I had a trackside window seat LB 😉 . 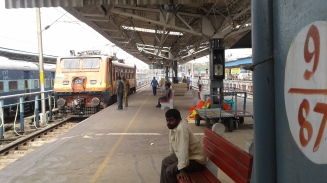 There was a PSR of 30 kmph before BBQ. I also saw Don Bosco Higher Secondary school before VPY. There was a TSR of 30 kmph before Villivakkam – there I saw a road with name “Loco Scheme Ist Street”! :O I guess it is a railway colony! Near Korattur there was a lake full of moss. By now we were galloping and the continuous honking (the two LT horns and a rarely used HT whine) was a treat to the ears, accompanied by mild flat wheel sounds coming from the rear of the coach :P. There was another dirty moss-filled lake near Ambattur. As we crawled through Avadi, I could see the Tube Products of India factory in the right. I also saw the Madras College of Pharmacy and 2 Kalyana Mandapams before a WAG9 hauled BOXN rake crossed us (a cue to the freight action to follow). After the line to PTMS branched off to the distant right, a Tigerface WAG7 hauled express crossed us – probably 16054 TPTY MAS express.

The surroundings became more rural from hereon. I observed Jaya College and Vivekananda Vidyalaya, and a Tigerface WAG7 hauled BOXN freight at Veppampattu. There was a lot of stagnant dirty water for a while, and quite a few temples before the crawl through Tiruvallur. There was a container freight hauled by GMO WAG9H 31822 standing in the opposite direction. Then an express crossed on the left before the Egattur forests. There were a lot of sheep, goats, cows and calves grazing. There was a stagnant patch of water in the dry Kushasthalai river. My ticket was then checked – the TTE asked only for the ID proof – I showed him my PAN Card, but he told me that it’s a photocopy and asked me to keep Aadhaar card for safety! Aaah…just underlines the obsession of our government with Aadhaar for anything and everything! Anyway, I have the original Driving License as well just in case!

There was a BCNA rake led by Ajni WAG9 31259 standing at Tiruvalangadu. We crawled and changed tracks – now we were on the leftmost track! On the right most track there was a TSR of 100 kmph! I then saw a stagnant pond and a long line of palm trees, as well as a Splendor bike parked in the midst of this wilderness before Mosur! After Puliyamangalam, 12610 SBC MAS Intercity exp crossed us with RPM WAP7 30427. Then there was again a TSR of 100 kmph on the right most track! :O Then there was a lake before a PSR of 15 kmph (which would continue till we took the line to RU from AJJ). In the AJJ yard, there was a Car Carrier AutoLinx rake and a BCNA freight with LGD WAG9 31556. An EMU departed towards MAS on the distant right as we pulled into the station (PF 3) at 13 44, 22 mins late. 3 families got in our coach. There was an EMU waiting on PF 4, ready for departure towards MAS.  22638 MAQ MAS West Coast express arrived on PF 2 as we departed after a two-minute halt.

An LHB rake crossed us on the left (12551 YPR KYQ AC superfast ?)while we changed tracks to move to the RU line. There were people hanging from the doors of our front 2 coaches! :O On the line to RU, there was a TSR of 80 kmph for passengers and 50 kmph for goods. Soon there was a teaser of the scenery to follow later in this section, in the form of a forest, corn fields, palm trees and irrigated fields before we passed the ghost station of Ichiputtur. Then there was a stagnant pond and some coconut trees before an express crossed with a P1 – probably our counterpart 11041 CSMT MAS express. Then there was a small pond with water lilies and a lot of houses and an LC before we pulled into Tiruttani, where a few people got down and a family got in. 12245 HWH YPR Duronto (apparently running about 3 hours late) passed the station without stopping, hauled by TATA WAP7 30549.

There was a small river called Nandhi, before a highway gave us company on the right. Then came the scenic Ponpadi station (last station in TN on this route) which was full of trees, following which there was that famous 90 degrees curve.

On the DOWN line, there was a TSR of 50 kmph for passengers and 30 kmph for goods before Venkatanarasimharajuvaripeta – the station with the record for having the longest name in IR (or has it been broken?), and the first station in A.P in this route. There was a Grand World Water Park (a really scenic location for a water park, I must say! 😀 ) . Then there were some stagnant water patches and the dry Nagari river. There was a tractor on a thin road next to the DOWN line bridge! Now the DOWN line was really down – as it was below us! 😛

Then there was a beautiful lake near Ekambarakuppam, in which there was a grass island. I saw cows and calves grazing. There was also a uniquely shaped mountain peak christened “Dadar express” by railfans – since it resembles a train being pulled by a diesel loco – 12163/64 MS-DR superfast (earlier 11063/64 MAS-DR express) has always been associated with diesels; in fact, for a brief period from 2003 to 2006 it was hauled by a diesel loco (usually a GTL WDM2) between Pune and MAS! 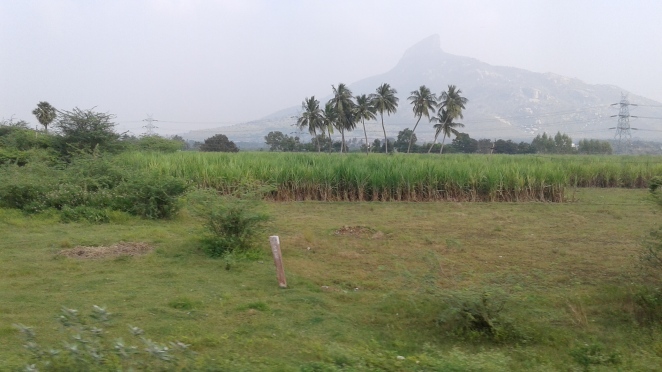 Check this video of us blasting through the scenery – rock cuttings, greenery, trees and mountains; skipping Vepagunta on the way – all the way our P1 honking melodiously https://www.youtube.com/watch?v=2M6P4-2EBOc&t=9s . Then there was the lovely sight of boys playing hockey at a school, while a lot of girls and boys watched. This school was, again; in a very scenic setting – with a beautiful lake nearby and a lot of coconut trees. A lot of buildings signalled the arrival of Puttur, where some people got down. We overtook a freight led by twin WAG7s (leading – ED 27481). The separation between the DOWN and UP tracks made for some good photography! 😉 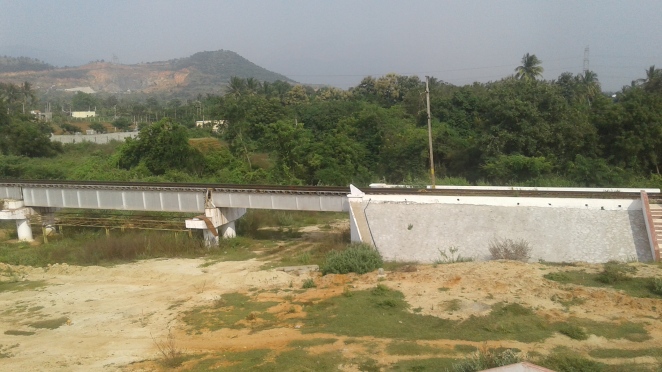 There was another beautiful lake and some spectacular scenery (yet again!) in the form of forests and surrounded by a line of coconut trees and of course the Sapthagiri Hills in the distant right! 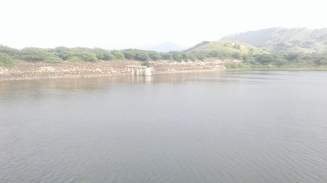 There was a TSR of 80 kmph before Pudi, where we overtook a TNP ALCO with  a few freight bogies. There was the dry Swarnamukhi river, before we crossed an almost 1 hour late running 66048 TPTY MAS Fast MEMU. At RU yard, there was an LGD WAP4 22717 coupled to a now rare Rajdhani liveried AJJ WAP1 22058. There were Humsafar coaches (have seen them here since March end this year!), few BCNA rakes, an accident relief train as well as a WDP4D in the distant right; as we pulled into the station (PF 1) at 14 57, 7 mins late. Near us lay GTL WDM3D 11118 with 2 Accident Relief Medical Vans. On PF 5, 22603 KGP VM superfast pulled in behind RPM WAP4 22872. On the distant right, a BCNA rake led by BZA WAG7 28464 (in WAP4 shell) left (in our direction) after continuous LT horn blowing. On PF3, 16381 CSMT CAPE Jayanthi Janata express arrived behind ED WAP4 22526.

CSMT – Chatrapathi Shivaji Maharaj Terminus (Mumbai CST with the ‘Maharaj’ in it! :P)

One thought on “A Return Journey To Remember – Part 1”