Sexism and the difficult task of convincing men – 2

This is part 2 of my blog post on sexism in India, and the difficulty in convincing other men on our sexist culture and the need for change in attitude towards women; continued from https://ashwinkumar1989.online/2017/10/27/sexism-and-the-difficult-task-of-convincing-men-part-1/ . This mainly concerns the conversations between me and my right-wing and anti-feminist friend mentioned in Part 1, whose attitude proves the challenge in changing the mindset of men (including me as well!) ; who have been conditioned since childhood under patriarchy, and thus often are either ignorant of sexism in everyday life – or fall prey to sexist propaganda freely available on the Internet.

I shared him the picture (that explains sexism) shown in Part 1, and this was his response. 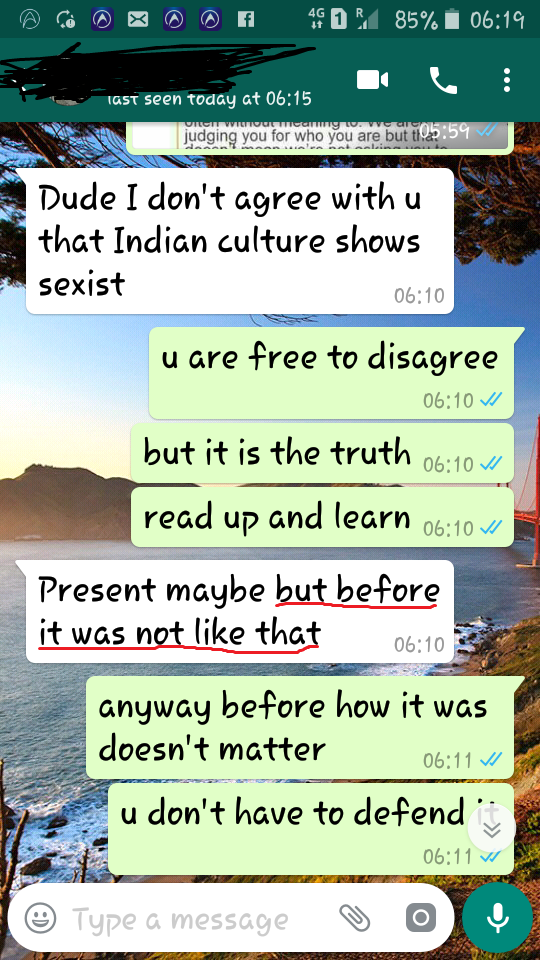 He gets defensive, claiming Indian culture is not sexist. I suggest him to read and research about sexism. He says present maybe sexist but before it wasn’t – I wonder the relevancy of the past here; when it is the present sexist culture we are dealing with. 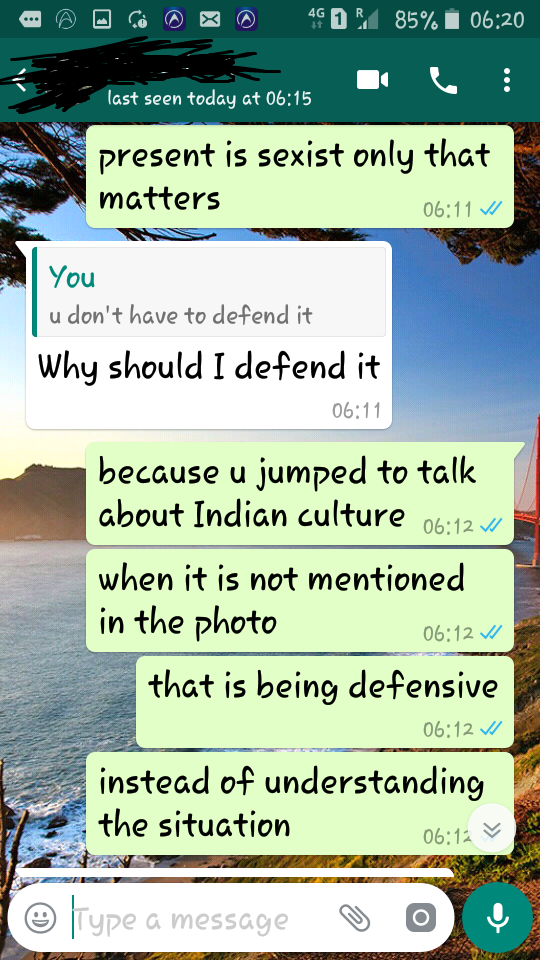 He denies defending the sexist culture. I point out to him that he jumped to talk about Indian culture, when it is not even mentioned in the photo. He doesn’t even bother to understand the context and read the material (about misogyny and how women have to sugarcoat their words in order to avoid hurting men), but picks out only the point that Indian culture is sexist; defending it.

He becomes evasive, saying any culture cannot be defended. I point out to him that sexism has been ingrained in him, and he does not intend to be sexist but the culture and its values have been instilled in him. I also add that I was also sexist, but I learned about sexism and changed my behaviour and perspective towards women. He then accidentally admits his sexism, saying “I am sorry I am sexist and neither the culture”. Actually he wants to say that neither is he sexist or the culture; but due to a grammatical error, he ends up admitting sexism! 😛 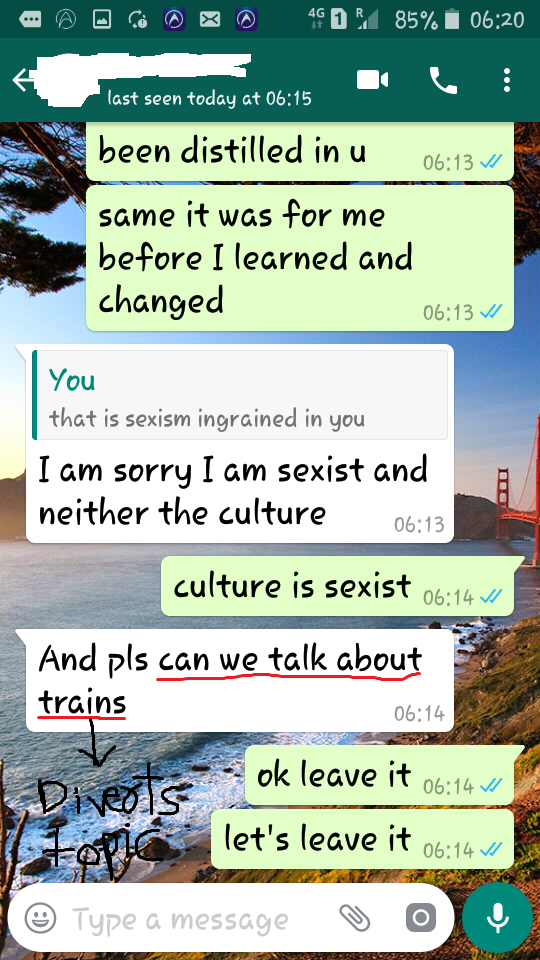 I correct him that the culture is sexist. He then finally changes the topic, having run out of arguments! 😛 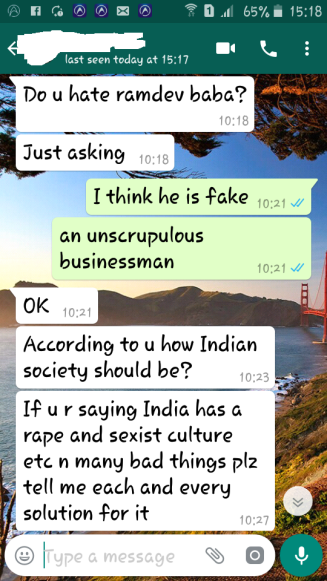 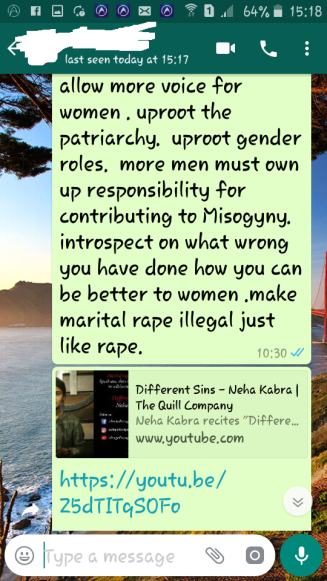 A day later, he asks me if I hate Baba Ramdev. I reply that I think he is fake and an unscrupulous businessman. Suitably provoked, he asks me how I think Indian society should be – and asks me to tell me the solution for each and everything. I accordingly suggest that women should have more voice, patriarchy and gender roles should be uprooted, more men must take responsibility for having contributed to misogyny and introspect on how they could have behaved better with women; and also marital rape should be punished the same way rape is punished. I also share with him the video of Neha Kabra (a friend of mine and one of the co-founders of The Quill Company, a platform for spoken word poetry) performing her poem “Different Sins” about marital rape. By the way, it is a great video and has even crossed 1 million views; I suggest you all to see it; especially poetry lovers! https://www.youtube.com/watch?v=Z5dTITqSOFo 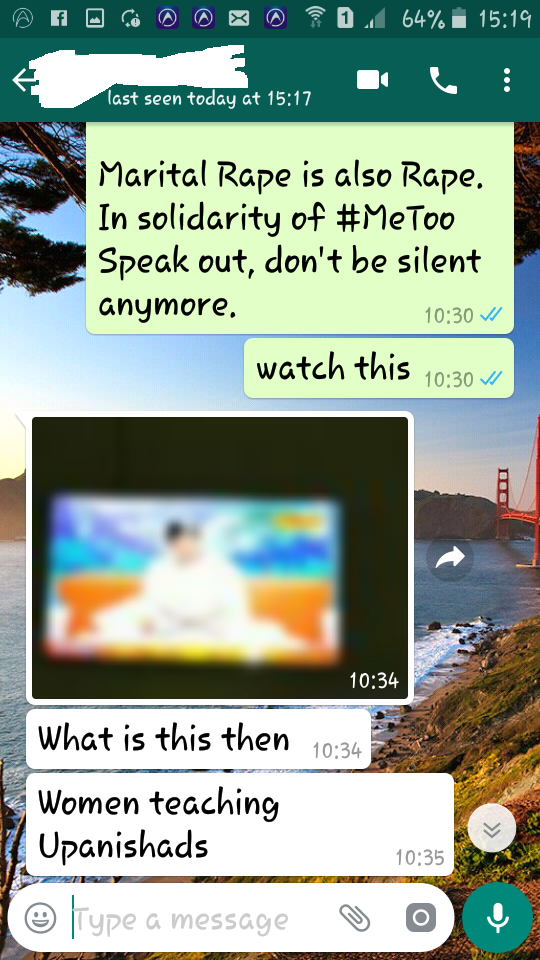 His response to that stumps me – he shows me a picture (now deleted from my phone to conserve space)  of  a lady teaching Upanishads. I have mentioned a lot of things – patriarchy, misogyny and marital rape (and even shown him a video speaking about marital rape) ; but his tunnel vision picks just an image of a woman teaching Upanishads to prove that our culture is not sexist! I decide just to ignore him, as I feel it is pointless to discuss further; given his ignorance. 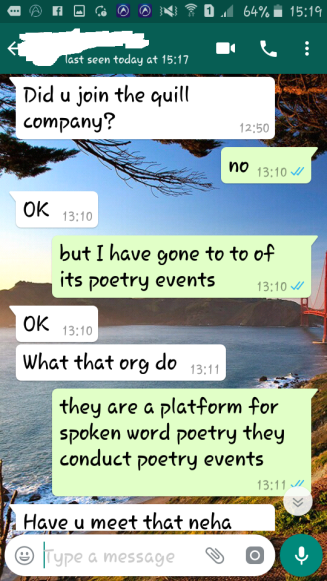 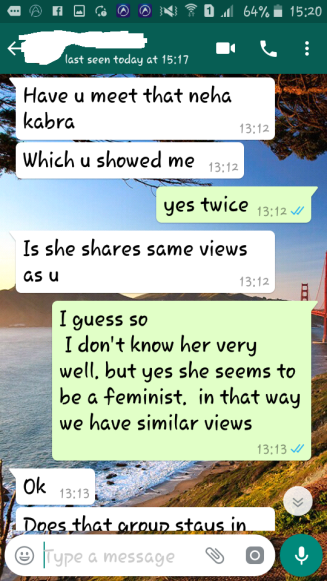 I don’t know whether he has really seen Neha’s video, but he suddenly seems interested in her and the Quill Company; asking me what they do and whether Neha has the same views as me! :O I accordingly reply that The Quill Company are a platform for spoken word poetry, and that I don’t know Neha very well (since I have met her only twice); but she seems to be a feminist – in that way we have similar views. I am pleasantly surprised by his interest, until a message from him the next day. 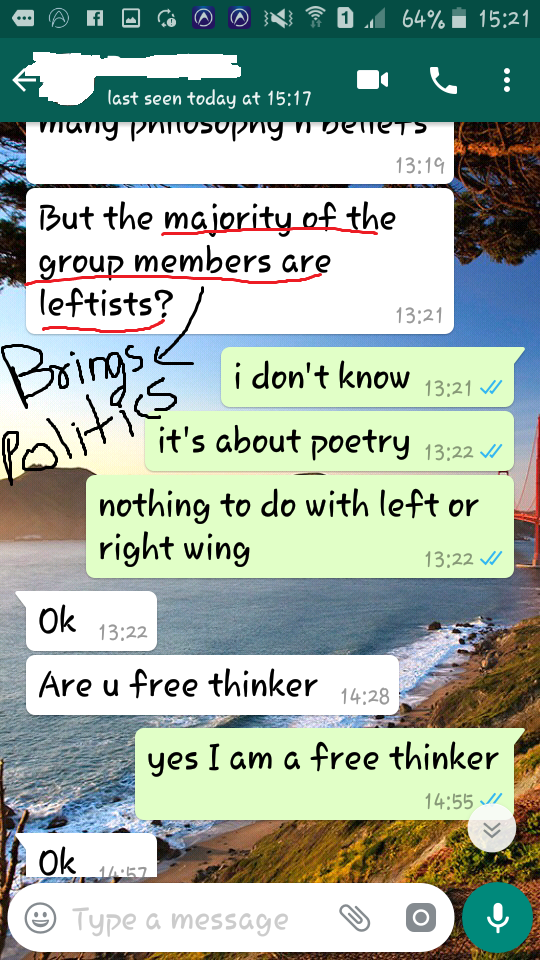 He suddenly makes the whole issue political, asking me if the Quill Company is a leftist group! :O This is the major problem with Modi bhakts, Sanghis, anti-feminists etc. – if you have different views on any issue, they brand you as a leftist. Here we were talking about patriarchy, misogyny and marital rape – and he has the nerve to say that The Quill Company is leftist because one of its co-founders speaks out against marital rape  – which is a heinous and dastardly act and any decent human being should agree that it should be criminalized, whatever his/her political views may be!

No wonder it is difficult to convince other men about our sexist culture and the need for change in attitude towards women, when they have been conditioned since childhood with patriarchal beliefs. However, we must not stop our fight against the patriarchy. Everyday some kind of sexism is happening in every part of our country, and we must not remain silent. As male feminists, our role is to learn more and more about the rape culture, and how feminism makes a difference. Our role is also to keep talking to men and correcting any sexist actions of theirs, and impressing upon them the need to be more gender-sensitive. It is the duty of parents to raise feminist children (especially feminist sons who must fight against all kinds of gender stereotypes – feminist daughters have been coming up for a while already), as after becoming an adult it is much more difficult to change one’s ways and unlearn the sexist propaganda unleashed. Lets take inspiration from famous male feminists – Mark Ruffalo, Daniel Radcliffe (Yes, Mr. Potter! 😉 ), John Legend, Chris Hemworth, Joseph Gordon-Levitt, Ryan Gosling, Amartya Sen etc. Say no to patriarchy! We can make it happen!